Just the other night, after telling my kids to go to bed, I began tidying the house a bit so I could relax.

...but I just call it "I can't relax if their is shit all over the place, because I'll keep thinking about it until I clean it up"

Anyways...I was organizing the mess on the coffee table, stacking, arranging, throwing away etc. I moved on to the kitchen, putting a few things in the sink and straightening the counters.

Then, in a last fit effort to "relax" I stopped by the bathroom where I found my latest copy of Vanity Fair sitting on the counter. The magazine on the counter was not a problem (as was the toothpaste which was inevitably left capless and the little remnants of HWMNBN's morning shave that were all over the place) I mean, there is always a magazine or two (or ten) in the bathroom but this one was open to an article about a Sex and the City Tour through New York.

The page which was on display, was one that I recalled folding over and reading earlier in the day (yes folks, I read in the loo).

The article itself was pretty bland but there was a large cartoon of a woman and large bold text saying "WE PULL UP TO A SEX SHOP. THERE'S A BUZZ OF ANTICIPATION".

My first thought was:

"Great, Momo used this bathroom today...I wonder if she read the article???"

My second thought was:

"Oh well, if Momo did read the article, she'll probably ask me about it later and I'm sure it'll be a hilarious conversation" ...

You see, Momo just finished a Sex Ed class at her school and since then we have been having some great conversations about...well...SEX!

In all honesty, I thought the class would be some "this is your body", "you will begin to menstruate", "stay away from boys", abstinence only type program, and to be honest, that sort of turned me off.

I mean, I want Momo to know about her body and to stay sex free for as long as she can, but as a former sex educator, I wanted her to learn about how to take care of herself, how to be safe and most of all, to know that there was someone out there that she could talk to about this stuff (be it me or her teacher or some other responsible adult).

Funny thing is, I was not quite as prepared for Momo learning about sex as I thought I had been...

My first notion of just how unprepared I was, came when I was tucking her in one night and I made a little joke about the baby in my tummy (I'm not pregnant, but I was very full from dinner and developed a pooch). Anyhow, We all laughed at the joke then this conversation ensued:

Momo: (very seriously) Dad, I do not want a baby brother or sister, so when you use a condom, make sure to squeeze the air out of the tip okay? Otherwise some sperm could get out.

HWMNBN: (mortified and turning to walk out of the room, looks back and says), "Okay Momo, I'll make sure to squeeze the tip"

Me: Wow, Momo, did you learn that in Sex Ed?

Honestly, I don't remember what happened next...I think I said, yeah that's kinda gross but I really can't be sure I didn't fall on the floor and die for a minute... I mean, I'm glad that Sex Ed isn't about chastity belts and promise rings... and avoiding the reality of teenagehood in the year 2008, but my Momo is only 11. 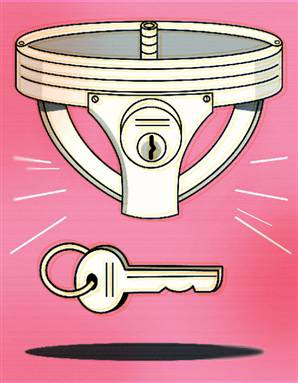 Momo: Mom, is it true that boys ejaculate in their sleep when they have "the dream"?

Me: (cracking up, because I knew my hubby would be mortified by this) "I don't know, ask daddy if he has ever had "the dream"

Momo: Well dad...did you ever have "the dream" where it makes you ejaculate in your sleep?

HWMNBN: (mortified and turning to walk out of the room, looks back and says) "Yeah Momo, but it usually only happens to boys when they are young...teenagers, I mean.

Momo: Does it happen to Mango?

Me: Probably. (Yelling playfully to Mango who is washing his face in the bathroom) Does is ever happen to you?

At this point Momo and I are cracking up, then she tells Mango what we were talking about he looks at us, walks to his room and says:

Momo: "But does it happen?"

Mango: (Walking into his room, shutting the door) "yes..."

Believe me, it was a hilariously funny conversation and at the same time, very heartwarming (not the talk of wet dreams but the bonding). I mean, I think the biggest lesson learned from all this is that even though I wasn't totally ready for Momo to be learning about squeezing the tip of a condom, or what oral sex is...I am totally cool with the fact that both of my kids feel like they can talk to me about anything!
Posted by Roxane at 11:17 AM

Quit lurking and drop me a comment...Puhleeeeze!

The Cast of Weirdos

The watchers in the woods...not really, just the follower(s) of the blog!